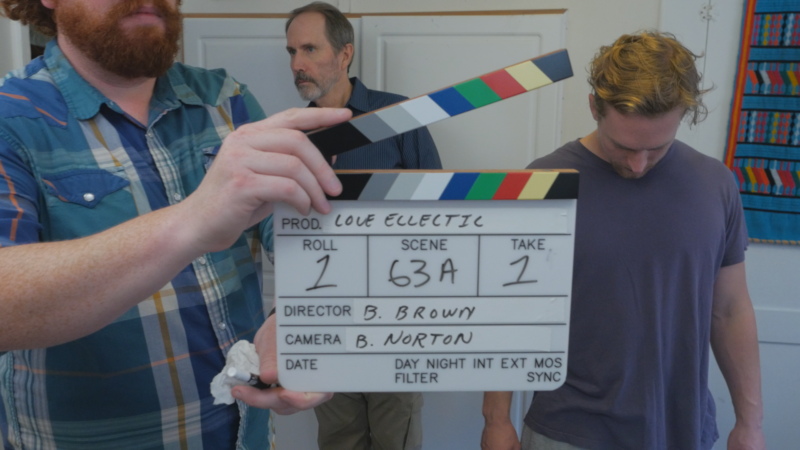 Preproduction – Part 1
Told from the perspective of producer Bill Brown… “it all started when my five year old daughter broke her arm, and my plans for the Summer were dashed, and I thought, how about shooting a film instead…”

Pre-production started very tentatively. At any moment the whole thing could have been called off. It was like a game to see how far things could go before hitting a game-ending roadblock. But each step forward went smooth. No roadblocks.   Each person I talked to about the project made it seem more real.   And as more and more steps were taken the production took on a momentum of it’s own. And at some point it became impossible to turn back. Too many people were counting on me.

I penciled in a budget of $25,000 that assumed I wasn’t buying or renting any equipment — I owned a small light kit and hoped on finding a cameraman who would contribute a camera, and there were lots of other production assumptions to make it work out.

Here’s the “Early Budget” & list of assumptions for Love Eclectic.

And here’s the “Project Concept” for Love Eclectic.

I combed through the script and listed the things I needed for each scene, and did a hypothetical shooting schedule that grouped all the similar scenes together.   I thought I could shoot about eight pages of script a day — that’s a lot compared to industry standards, but seemed reasonable since the scenes were so simple. At this point it was just guess work anyway. I also had a book titled “The Legal Guide to Independent Filmmaking” with examples of contracts, so I was ready to go.

The first big step was to find the locations to shoot at — tops being “The Shop” and “Jack’s House.” I didn’t want to go too far without getting at least those two locations figured out. I had a couple of places in mind, so I went there first, and I was pleasantly surprised that both were very receptive to the idea of shooting a film.

I’m not sure if either of those location owners really knew the extent of disruption our production was going to create, but both were very thoughtful and helpful and that made me comfortable things would work out. In fact, I felt all our location owners would help out if called upon.

And I did end up calling for help — like when I inadvertently switched the shooting dates of the two bar locations.   Somehow in the fog of preproduction, probably while cleaning up a draft schedule, I switched around Monday and Tuesday.  The big problem was that I didn’t catch the error until a week before we were scheduled to be there — all the cast and crew were depending on “wrong dates” including all the extras in the crowd scenes.

The simplest way to resolve the problem was to call up the two location owners and see if they would allow me to switch the dates.   It was a humbling moment. I’m sure they had also made plans surrounding those dates. And it was such a careless error.   I had been so careful with everything else — would they trust me now? Thankfully yes. They were both willing to adjust their schedules. We ended up hiring the bartender who was scheduled to work at the “Jazzy Nightclub” as a featured extra — and he performed great.

With the two biggest locations found and some good ideas for the rest, I now felt comfortable shifting focus to the next big step — crewing.

I had settled on the idea of using a crew of only four, and I was going to be director so that left only three more to find — Director of Photography (DP), Assistant Director (AD), and Sound.

I started off by looking for a DP since I thought this person might be able to refer me to the others.  I contacted several who had done low budget feature films in the area, but none were interested. Apparently this was going to be harder than I thought.

I expanded my search to include commercial DP’s — ones that did mostly commercial work — as long as they had done some short films to prove they understood narrative filmmaking.

I scoured Linkedin and the local production association (OMPA) for candidates.  I especially looked at the quality of their short films. I needed someone willing to work without all the luxuries of a big crew and other perks. Demands would be high so I needed an adventurous and problem solving type who was also genuinely enthusiastic about the project.

Referrals played an important role. I met someone in a workshop class who gave me the name of a sound guy he knew. I contacted that guy and got his resume and then he gave me a few referrals for the DP position. Although none of those secondary referrals worked out, one of them referred me to another DP, and that referral did work out — not as DP but as AD. Which was perfect because I had just found a DP on Linkedin and having an AD who could potentially help out on camera seemed like a great idea.

I eventually hired the original sound guy I talked to, so now I had everyone I needed — Justin Haynes (Sound), Brad Norton (DP), Adam Michaels (AD). All of them had broad filmmaking experience and could have switched positions in a pinch. And the biggest plus was that they were all enthusiastic and committed to the project.   I knew they would do whatever it took even if that didn’t fit neatly into industry categories.

The duties listed in my AD’s contract were so vague they included almost anything. Here’s an excerpt from the actual contract:
“… all services customarily rendered by Assistant Director and Second Assistant Director… in addition… duties may include: prep work such as making plans and communicating needs to the producer, helping manage locations, understanding the schedule and shot list, creating call sheets and doing calls, communicate costuming needs to cast, setting up craft table and monitoring it, securing extra releases, securing payroll documents (e.g. time sheets and W4’s), help decorate set, help set up equipment, do the slate, direct background action, do crowd control, tend to talent needs, supervise meal breaks, supervise the daily wrap…”

Whoa… that’s a lot.   Obviously there was going to be a lot of trust involved. I trusted the AD would at least try to do those things, and the AD trusted I wouldn’t be unreasonable. Trust is probably better than a contract anyway.

Having a crew on board made it seem like the real thing. We were doing this. But there was still one really big step to do — casting.   And that needed to happen fast.

I called a talent agent at Ryan Artists and gave them a list of the roles I needed. This seemed like a great time saver and a bargain since they only charged a 20% commission on my $125/day pay rate (the SAG ultra-low budget rate). It especially made sense for the many supporting roles I had which took a lot of time to sort through and were often only being hired for a day.

But I didn’t want to rely on just one source for casting so I also posted the project on a couple of online sites — Casting Calls and Backstage. It was surprisingly easy to set up and fun to browse through all the talent profiles. Although it was often frustrating to watch through their clips just to see a couple seconds of them walking through a scene without any lines. I didn’t really care about the films they were in, all I wanted to know was whether they could act or not. I wanted to know their range, body language, how convincing they were.   The clips I liked the best were monologues in front of stationary camera.

I quickly assembled a wish list of best prospects. I had a tiny office in the back of another business and got permission to use a big open area in the basement for auditions. It was a nice area, carpeted, with a bathroom, and had a few chairs and a table from when it was previously rented. And I only had to pay $100 for an entire month.   I set up a video camera and started setting appointments…
(To be continued)